It’s been a while since we’ve scheduled a dinner date, but it kept being pushed back due to whatever reason. Finally, we were able to match up to each others’ schedule and it was up to Mr K to decide on what to eat. He felt like Thai, and suggested ‘anywhere that is good’, that puts a lot of pressure on me, trying to narrow it down to one place out of all the other restaurants that are in Lower Mainland. I remember having a pretty good meal before at Baan Wasana Thai, so we headed over towards Kerrisdale right after work.

Finding parking wasn’t too hard, as long as you stayed off 41st Avenue. My favourite place to park is at a pubic parking place right behind Faubourg, no one ever checks after hours. Or at least I haven’t had a ticket yet, touch wood. 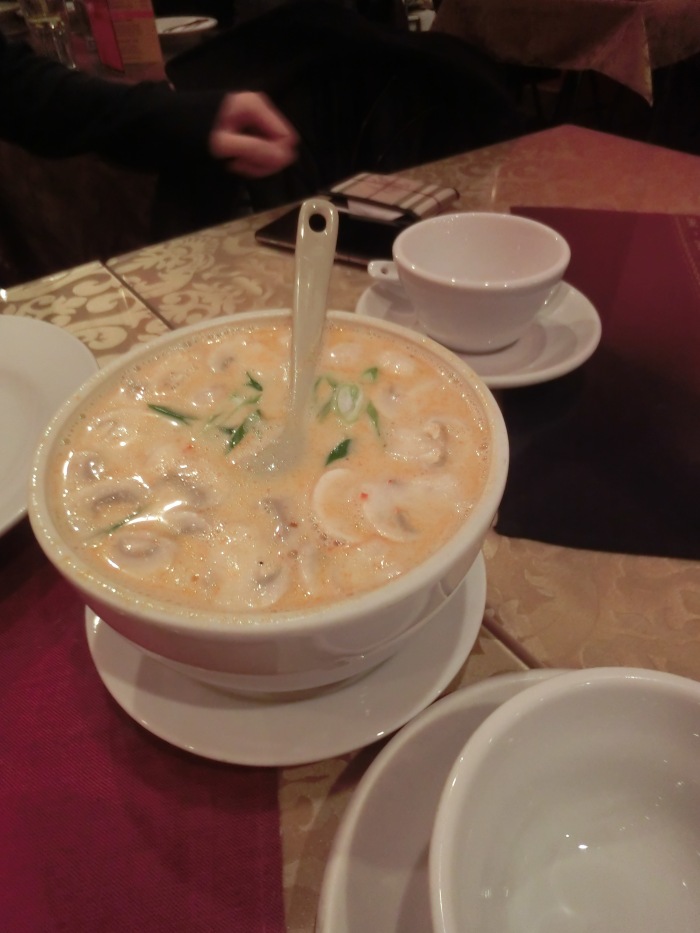 I wanted to order my favourite Tom Yum Goong, but it turns out Mr K can’t really take his spicy food that well, so we settled for a mild Tom Kah with Tofu, since we chose meat for our other items. It was was creamy and pungent in the herbs that were used, though galingale is under the ginger family I didn’t really mind the subtle flavours of it. It is much more spicy than ginger, so many that’s what masked the gingeriness of it. There was a lot of mushrooms which I didn’t mind, and you roughly get about 5 large servings out of this. 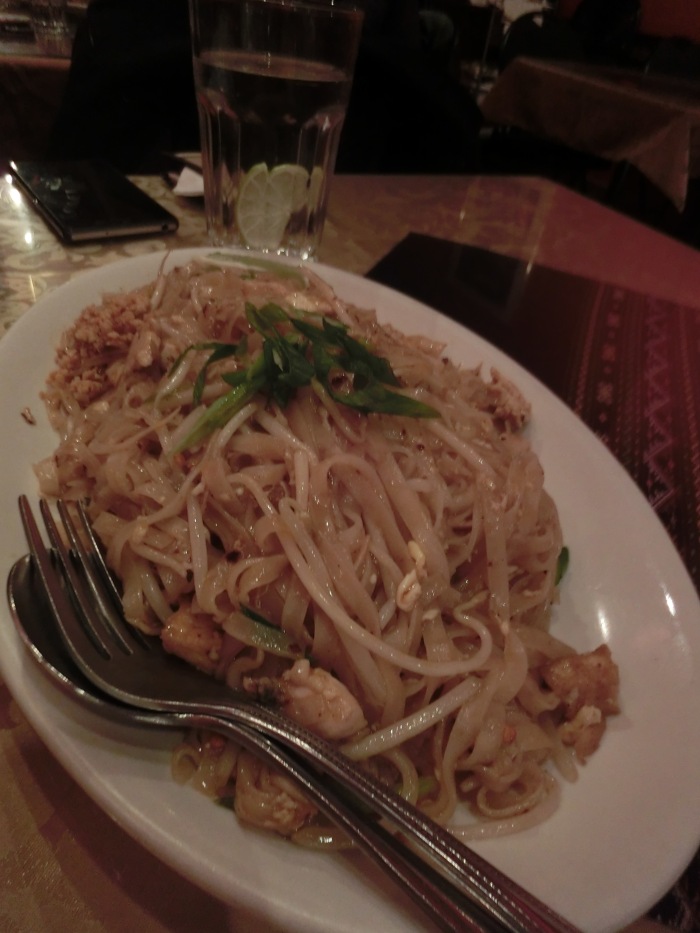 There was a choice of chicken, prawn or vegetables. Chicken won the lottery here though there were more noodles than anything, it was flavoured nicely but left you feeling kind of flat. Mainly because Mr K ordered it non spicy, it felt very one-noted and got boring pretty fast. It was tangy, but not tangy enough, it felt like a chore trying to finish the rest of this dish that we decided to just pack it up afterwards. 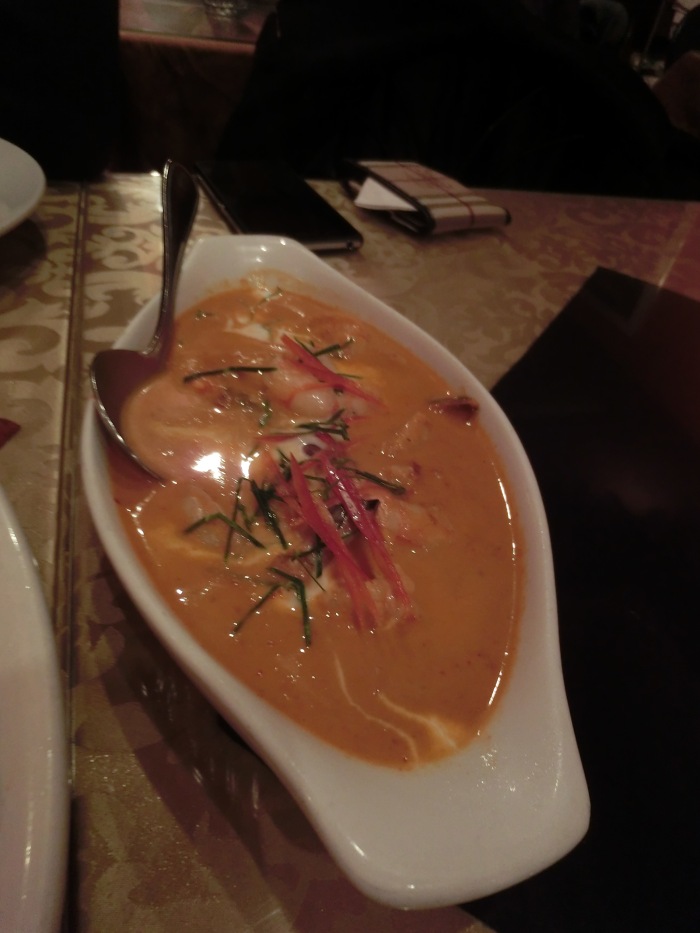 It was a choice between salmon and prawns, thinking that the salmon would taste overcooked, we went with the later. It was very fragrant with the kaffir and spices, yet the broth itself was very delicate. It did have a slight inensity in heat that made Mr K sweat a bit, but I really enjoyed it to the point of almost drinking the coconut milk. The remaining liquid is mainly used to slather on top of of the Pad Thai to make it a little bit more interesting. 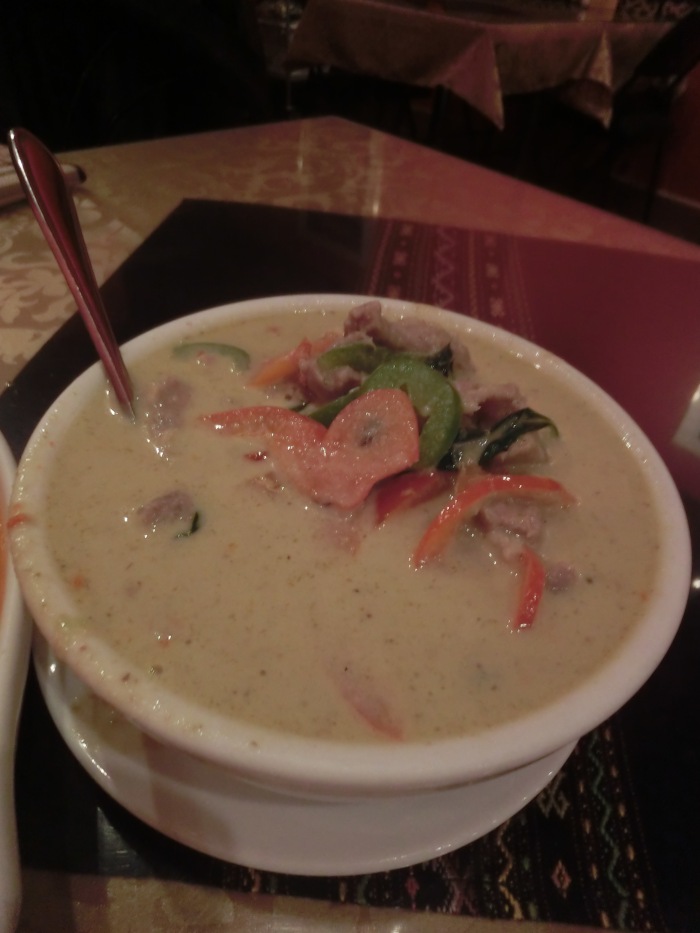 Where would we be without finishing off with a curry dish? I really like the option of having different meats you can choose from, for the green curry you had a selection of chicken, pork, beef, tofu or straight up vegetables. It was towards the runny side, which I didn’t mind since I inhaled it like soup. I had asked for no eggplant for those that were wondering, it was still very flavourful and loaded with pork.

Both Mr K and I were rubbing our tummies happily with more leftover to go. The service was nice and friendly, even she was surprised we finished most of what was ordered. We had to walk a few blocks before returning to the car in order for the food to digest. Pricing was pretty decent, and you do get a lot for your buck, maybe skip on the Pad Thai next time.