Trying not to eat out so much lately, especially late, but it seems impossible whenever I set a date with Tong. It’s bound to be after 8 due to his work schedule, it makes it difficult to make reservations a head of time due to the uncertain hours he works. We usually just think of a place, and walk in in hopes that there would be a table for us. 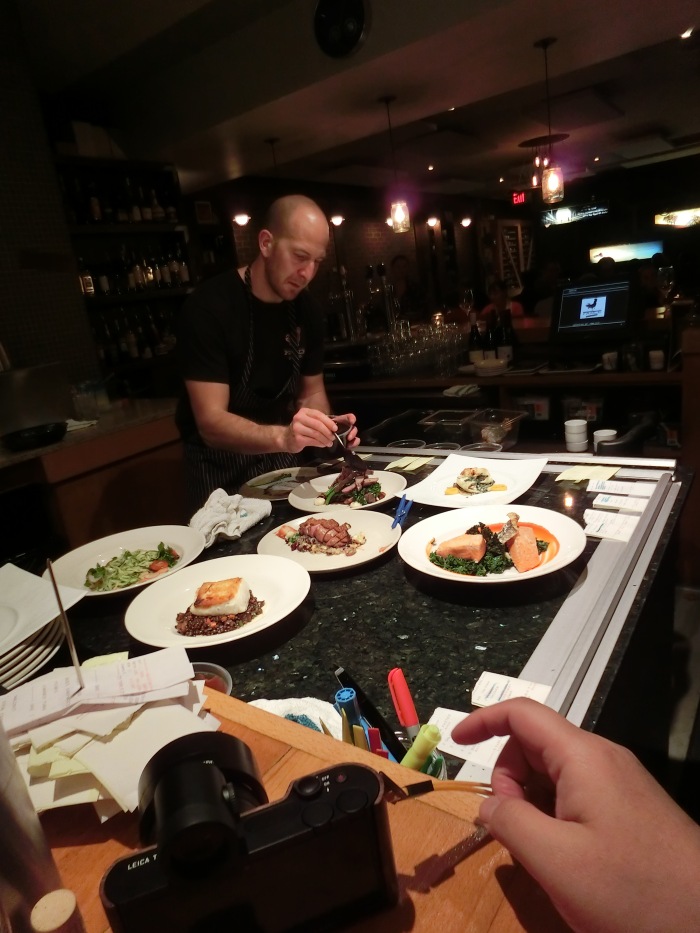 Luckily, our visit to Fable Kitchen was perfect, as there were only the bar seats available. It was interesting to sit in front of their open kitchen as the chefs hustle and bustle about, putting together your dishes under your judging eyes. With owner and head chef, Trevor Bird, being at the end of the line doing quality checks and final touches. It was like watching a live Food Network show, with meal included. 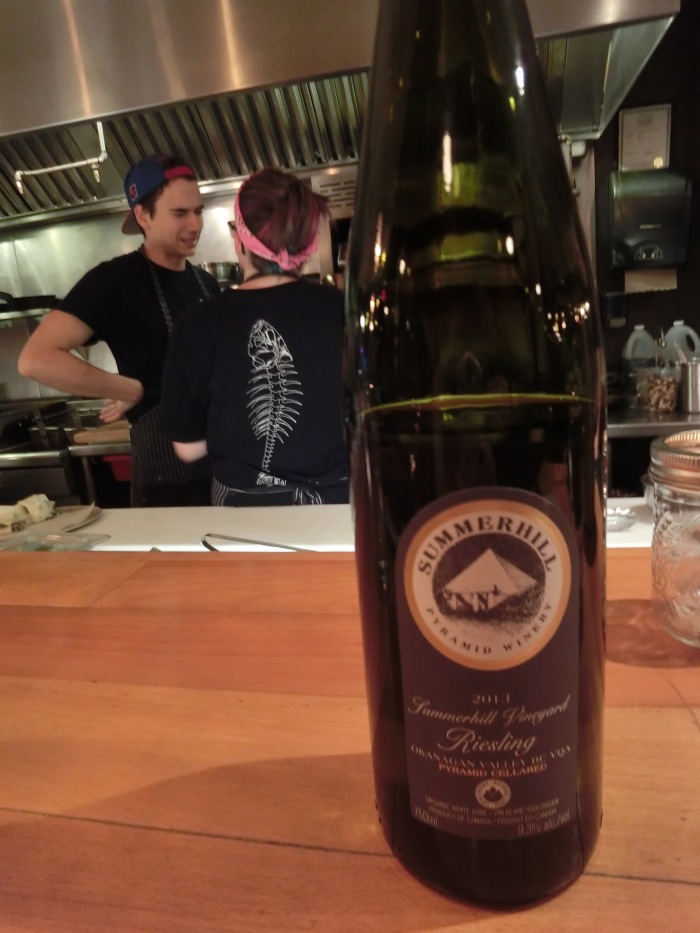 Looking through their winelist, I was surprise and happy to see Summerhill on their menu, because I’ve noticed that not a lot of restaurants carry this BCVQA winery. Even more so that it’s their Riesling, which I just absolutely love. Though Tong doesn’t drink (much), I had to order a bottle even if it meant finishing it all myself. It was sweet and light, truly a ladies’ drink, but it was exactly this one that got me so into Reisling and Gewürztraminers. Tong seemed to enjoy it too. 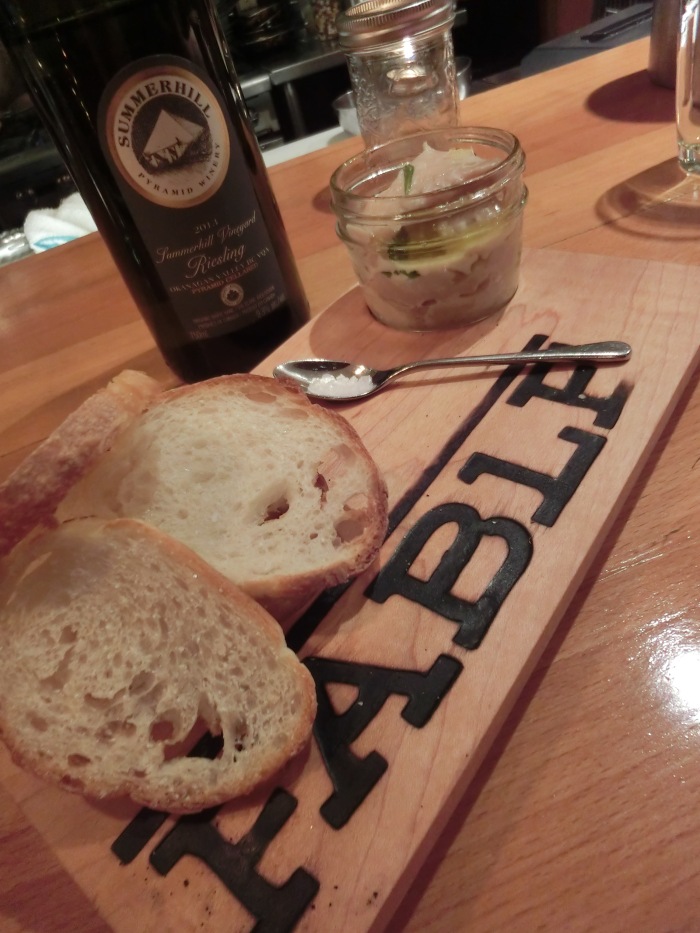 We asked our server for a recommendation for an appetizer, and she could not stop raving about their “canned tuna”, so we listened to her suggestion and ordered it. It came on a nice, custom designed, wooden board. Alongside few pieces of crostini, and a spoonful of sea salt. The sous vide albacore tuna was served inside a mason jar with lemon confit, fingerling potatoes, olive oil and herbs. We were instructed to add the spoonful of salt, and smash everything together until fully blended, then enjoy it with the toast. To say the least, this was a pretty tasty dish, the fish was stayed fresh and moist, but I just didn’t get blown away by it. I was expecting a lot more for the hype it was given, it fell a bit flat in the aspect, but it is better than the usual “canned tunas” that you find at supermarket shelves. 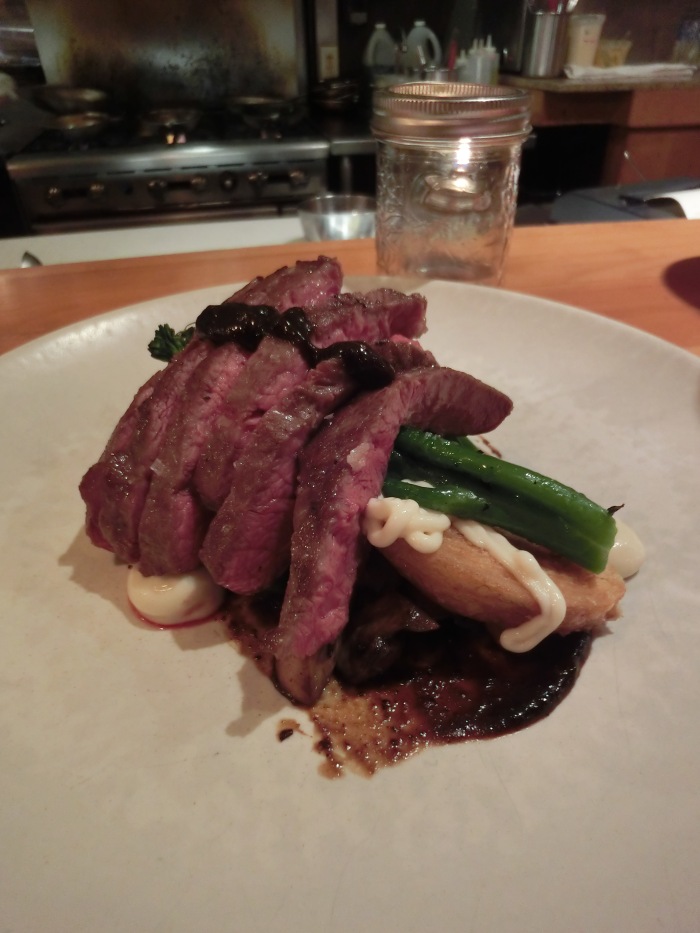 Watching the head chef finish the dish our dish was amazing, but nothing compared to how perfectly the steak was cooked to order. It was a nice medium-rare, with no tendons or hard to chew spots, it melted in your mouth. The frites, or more so wedges in this case, were an odd combo in my opinion, Tong didn’t feel much for them either. The mushrooms with the black pepper jam were delicious, and made up for the potatoes misses. 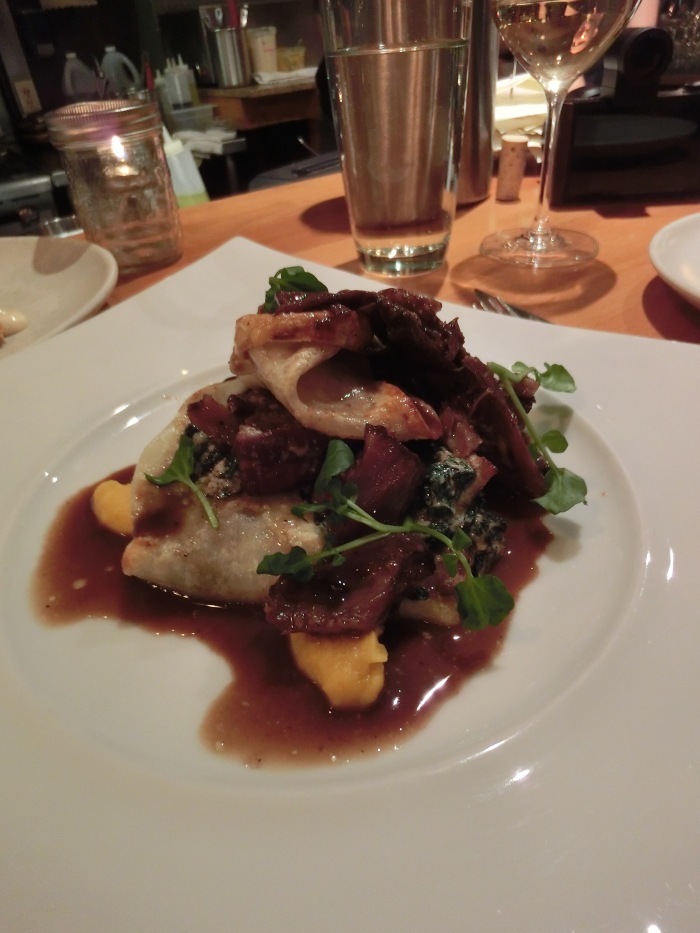 Unfortuatenly, because of their ever changing menu, I was unable to find out what this dish was. It is a good and bad for farm-to-table restaurants, but all I can say that this was once again, a tasty dish. 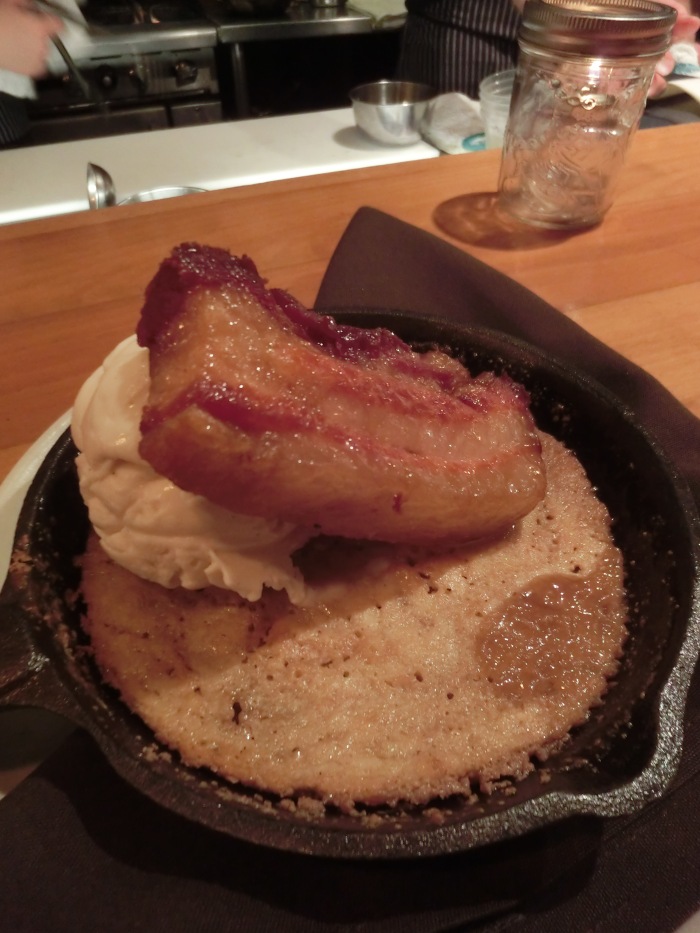 After our meal was done, we were contemplating on dessert. We once again took it to our server, which recommended their Maple Cake, claiming it was the best seller of the night. Trevor chimed in confirming the fact. Due to the recent bacon-craze, especially in desserts, I asked if I could include bacon. It just seemed to make sense in my mind, maple cake equals pancakes with maple syrup, equals taste better with bacon. Right? Trevor was intrigued by this idea, apparently he has never thought or heard of such a thing, nor has anyone tried to order it. Excited to try, he told another chef to start frying up their bacon from their brunch menu, and thus this was created. The cake felt a little underdone in the middle, or maybe that was just the nature of it. It was sweet and chewy, with the ice cream providing a nice balance to calm down the flavours and the heat. The bacon was the highlight, not being too fatty, the thick-cut slice only cost an extra $3, but was totally worth it. Trevor checked up on us midway to see how we were doing, we thanked him for the meal and the bacon.

With friendly staff and a welcoming interior, Fable not only serves comfort food, but is a place of comfort. It boasts farm-to-table and actually delivers. They come at you with opening arms, filling your tummy and listening to your suggestions. I can’t wait until the next time I get to return for dinner, or try out their brunches just so I can indulge in another taste of their bacon without feeling weird to order it for dessert.